A cold, sweet, creamy beverage that's perfect for any weather! Spice it up with a little rum for a dirty horchata!

Horchata, or horchata de arroz, is a cold and refreshing rice milk drink. This drink originated from Spain where it was made from tiger nuts, but when it journeyed on over to Mexico it was transformed into a rice-based wonder.

I've been loving this in combination with my cold brew coffee in the morning.

If you're not too familiar with the deliciousness that is horchata, let's get to it.

For this recipe we're using the rice-based, Mexican version.

Rice: I haven't made horchata with nuts before, but you could also try it with almonds. I've used basic long grain rice and Jasmine rice, both are great.

Cinnamon: I use ground cinnamon only. Because we're not heating this recipe, I don't use cinnamon sticks. Don't go too heavy handed with the cinnamon, you can overdo it.

Sugar: Granulated white sugar is the best with this recipe. I haven't played around with other sugars yet, but you can also try using maple syrup to replace the granulated sugar.

Water: Some water is necessary to thin out this drink. It's easy to adjust as needed to meet your preference. If you're using coconut milk, try using coconut water in combination with that.

Ice: Horchata is always served ice cold so dump in those ice cubes! This recipe uses more milk than my original recipe since you'll want ice cubes, which end up watering it down a bit. If you're going the coconut route, you can make coconut water ice cubes to top it off with.

You'll need a blender and 2 - 64 ounce mason jars, or 2 large vessels for transferring the mixture between.

This batch will yield 52 ounces.

Make it a Cocktail

You can add rum, vodka, whiskey, coffee liqueur, to your horchata for a boozy and delicious combination.

Use horchata in place of your coffee creamer or milk for some wonderful added flavor! And yes, you will want to just have half coffee, half horchata, but there's nothing wrong with that! If you like this idea, you may also enjoy my Vanilla Cinnamon Almond Coffee Creamer. 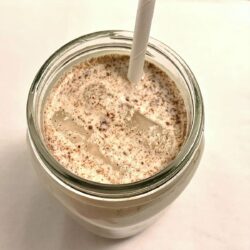 Keyword horchata
Tried this recipe?Let us know how it was!