I've finally gotten around to sharing my amazing cinnamon roll recipe! This has been a long time coming with several tweeks to the recipe over and over. That just means that I have made this MANY times recently, which hasn't been a complaint in my household.

Right off the bat, you have to know that if you're up for making cinnamon rolls, you're not looking for a healthy recipe, but instead something incredibly sweet, enjoyable, warm, with the perfect flavors in every bite. These cinnamon rolls are truly rich and creamy, with the most incredible frosting! Here are some tips and tricks to making the best ever cinnamon rolls!

Tips for the Perfect Cinnamon Rolls

Warm Milk: When you're making the dough, make sure that your milk is warm and not hot or chilled. Don't substitute water because the milk changes the gluten structure of the dough to be lighter and fluffier.

Yeast: No matter what kind of yeast you're using (rapid rise or active dry) I would recommend adding the yeast to the warm milk to let it active before combining it with the remaining ingredients. I use this Saf Instant Yeast and I've loved it for all my baked goods.

Flour: I have only made cinnamon rolls with white or white wheat flour. If you're up for trying whole wheat you can definitely give it a go but it will change the texture a lot and possibly make for a slightly heavier cinnamon roll. But, you can always try half white and half wheat! I use all purpose flour, nothing fancy.

Yogurt: I have never been one to use pudding in my cinnamon rolls, but yogurt replaces that role so nicely. It helps the rolls keep their softness while still adding to the fluffiness. I have tried the method of using a potato in the dough, which some people swear by saying it makes for the fluffiest and softest cinnamon rolls. I didn't find this to be true. Maybe it makes it fluffier than some recipes, but my recipe still beats using a potato, and it's less leg work!

Filling: This is one part that I've changed up so many times. I had started with LOTS of cinnamon and molasses and I slowly backed it down and changed up the ratio between the two until I could taste both but neither was overpowering.

I don't use brown sugar. It's not because I'm leaving out refined sugar (obviously there's lots in here) but because I never have brown sugar on hand! I do have white sugar and molasses so I just make my own. Making your own changes the liquid content though so it's not always easy to just swap out sugar + molasses for brown sugar. My filling is pretty wet but that helps the cinnamon rolls have a gooey center, while at the same time having a fully baked roll. I add nutmeg to my filling which doesn't overpower in the least but blends in perfectly. If you really like cinnamon you can add another tbsp. but I would not recommend going over 4 tablespoon total. I've done 5 and although it might taste fine if you try the filling wet, once baked it just gets stronger.

Frosting: The big secret to amazing cinnamon roll frosting is almond extract. You have to have this! I use full fat cream cheese, otherwise the flavor changes but of course you can use a lower fat option.

I never keep powdered sugar on hand. One reason is because I have no need for sugar with added cornstarch. I make my own powdered sugar by just blitzing sugar in the blender until it's a fine powder. I don't add anything else to it and it works great every time!

How thick you want the frosting is really up to you. Start with a small amount of milk and gradually add more until you have it to the thinness of your liking. I wouldn't recommend more than 6 teaspoon but if you're wanting something super thin you can add more.

I always made the same frosting recipe but every time my husband always asked if there was any leftover frosting. I finally did 1 ½ times the batch and it was great! It's definitely a thick layer so if that's not for you then here's the original, which is still a great amount and covers the entire batch. 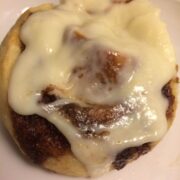 Welcome to my site! I'm a Self-taught cook and baker, Occupational Therapist, and supporter of wholesome living. Learn more About Me →