Nested eggs is one of my fun breakfast recipe with a hash brown bottom and fluffy baked eggs on top.

This recipe took a lot of trial and error for me to get it just right! It was so good though, I wanted to get it to a point where I could easily make it without having to guess on ingredients and timing!

I have made this recipe on the stovetop, which uses different timing and steps, but it just didn't taste the same. When you bake it you get a fluffier egg with that lightly browned top that you can't get on the stovetop.

Russet potatoes work before because they hold together well and don't break down while baking as much as a red or golden potato. They give you a crispier hash brown.

Large eggs are the best to use for this recipe. You can use extra large as well.

Milk gives the eggs just a little more fluff and volume. You could replace it with cream or half and half as well.

Good ol cheddar cheese has been my go-to with this recipe to keep it simple. It has that sharp bite to bring more flavor to the dish but you can get creative with what cheese to add!

Parsley bring flavor, texture, and color to the party. You could replace it with cilantro or another herb of your choosing!

Zucchini makes a great vegetable addition and I use this often. If you're going to add zucchini you'll want to shred it, then squeeze out the excess liquid.

Onion is always a great option to add to any egg dish! I have tried adding diced and shredded onion to the hash brown bottom and I have to say I didn't prefer it. Shredding it changed the flavor in a way I didn't prefer and added too much moisture. Diced affected how it held together and I just prefer to make it easy and add it into the eggs!

Dried rosemary and garlic granules are my favorite seasonings to add. Feel free to change it up as you wish with fresh or dried herbs.

What Size Skillet Should I Use?

I use my 9" cast iron skillet for this recipe. It fits 2 ½ cups shredded potatoes perfectly. If you choose to use a 10" skillet I would increase potatoes to 3 cups. If you choose an even larger skillet you will need to adjust the recipe accordingly so that the ingredients fit to the edge of the pan and aren't too thin!

If you're using a larger pan you might need to increase the cook time.

I love a good crispy hash brown, and baking them is very similar to cooking them on the stovetop. I follow the beginning of making my Perfect Hash Browns for this recipe. Follow my hash brown recipe to learn the tricks to getting crispy brown hash browns.

One step I don't skip is rinsing off the grated potatoes. Use large holes of a cheese grater, then use a strainer to drain the water and paper towel to pat dry.

Don't overfill the measuring cup and think that 3 cups will work the same as the 2 ½ recommended, it doesn't turn out the same!

Another of the keys to a crispy bake is to toss 1 tablespoon olive oil in with the shredded potatoes, then use 1 tablespoon oil directly on the skillet. That way you can just leave the potatoes to bake and not worry about them burning on top.

I have attempted to remove the hash browns once cooked on one side and flip them to cook again before adding the eggs. That way didn't work. Even if the hash browns hold together during the flip, you're dealing with a hot skillet and it's just risky. Also, if the potatoes cook on both sides then the eggs don't stick as well. Just let them brown on one side and it will be plenty crispy!

Steps for Making these Nested Eggs

Equipment Used for this Recipe 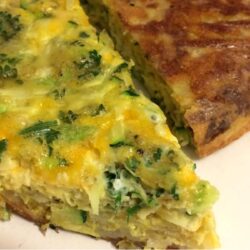 For the Hash Brown Base

Optional Ingredients to add to the Eggs

Making the Hash Brown Base

Tried this recipe?Let us know how it was!